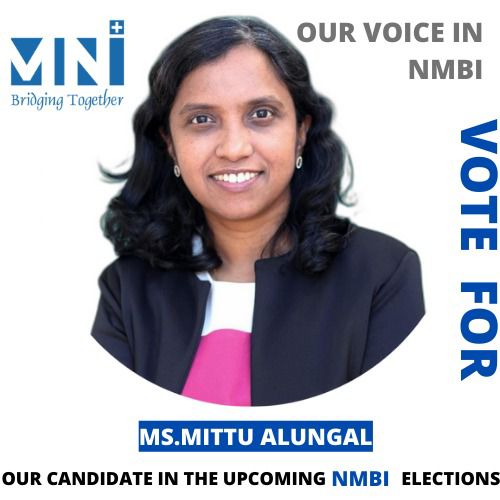 MNI has decided to nominate its central committee member Mittu Alungal as the candidate for election to the board of NMBI in September 2022, in the care of older persons division. Mittu is currently working as Director of Nursing in the Meath Community Nursing Unit under HSE. All registered nurses who received their PIN number on or before 9th August 2022 can cast their vote online between 13th to 21st September. As you all know, MNI was formed in 2020 by signing an agreement with INMO for working together, in presence of the then honourable Indian Ambassador, Mr Sandeep Kumar. All nurses in the Republic of Ireland with a migrant origin regardless of the differences in religion, cast, creed and politics can take membership and work in MNI. Currently, nurses from India, Philippines and various countries in Africa are members of MNI.

Why MNI is contesting in the NMBI Board Member Election?

Since its formation in 2020, MNI has been actively engaging with the migrant nurses in resolving their work related issues, delay in getting critical skill permits, atypical work permits and so on. The majority of the complaints MNI received last year were about the delay in getting decision letter (DL) and PIN number from NMBI and the discrepancies and unfair treatment during the aptitude test and adaptation programme. MNI had raised these issues a number of times in the meetings with the CEO of NMBI Ms Sheila McClelland and as a result, many issues had been resolved. To combat the delay in processing time for decisions letters, NMBI had appointed 10 news registration officers.

Migrant nurses is a major work force in Irish healthcare. However, this isn’t reflected in the higher management and policy making entities like NMBI. Their representation in the board of NMBI is very minimal currently. The document “Consultation to Inform NMBI’s Statement of Strategy 2023 – 2025” which was sent to MNI by NMBI for comments, states that when 1526 nurses qualified in Ireland registered in the NMBI in 2021, 3094 nurses registered from non-EU countries. The document also states that 90% of the 3094 non-EU nurses were from India. It is evident from this document that the number of nurses register in the NMBI from non-EU accounts for 2 times of the nurses who are qualified in Ireland. Nonetheless, this isn’t reflected in their representation in the policy making entities. On this backdrop, MNI thinks that it’s vital to contest in the upcoming board election and to work for Mittu’s success, in order to combat various issues faced by migrant nurses. Hence, MNI humbly request all nurses in Ireland to cast their vote in favour of Mittu, to ensure her success.