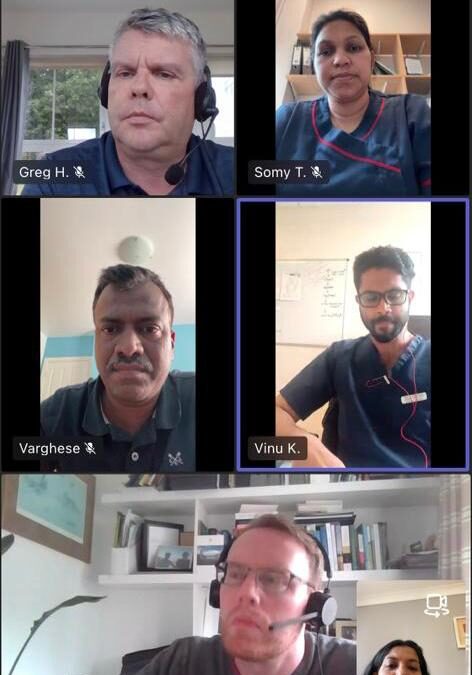 Migrant Nurses Ireland (MNI) held an online meeting with Mr Ray Healy (Head of Registration) and Mr Greg Harkin (Head of Communications) of Nursing and Midwifery Board of Ireland (NMBI) on Tuesday, 21st July to discuss the key issues pertaining to overseas nurses in Ireland. Varghese Joy, Convenor, Aiby Thomas (Joint-Convenor), Vinu Kaippilly (National Membership Coordinator) and Somi Thomas (Central Executive Committee Member) represented MNI in the meeting.
The meeting was very positive and productive where 4 key issues were raised by MNI which was listened to very well and mitigating actions were promised by NMBI officials. The issue of delay in processing time for the decision letter despite many interventions taken by NMBI so far, was raised as a serious matter. MNI had given the data to NMBI prior to the meeting which was collected from a large number of nurses from various countries who are grappling with the delay. Mr Healy accepted the fact that delay still persists, however, NMBI is trying to do its utmost to mitigate this problem. Mr Healy added that there is an almost 100% increase in the volume of applications where 2400 decision letters (DL) were issued last year, 2200 DLs have been issued this year so far and the number is expected to reach 5000 by the end of this year. NMBI promised that despite the sheer increase in the volume, NMBI will further put measures in place to mitigate the delay in processing time for registration for overseas nurses.

The issue of candidates being asked to arrange the Certificate of Current Professional Status (CCPS) or certificate of good standing after the nurses arriving in Ireland and completing their adaptation programme or aptitude test was also raised in the meeting. MNI expressed the concern of its many members in this regard, stating that it is extremely difficult for a migrant nurse to arrange CCPS in their previous jurisdiction while in Ireland. Mr Healy stated that NMBI only requests CCPS from nurses who have worked within the last year and whose CCPS is more than one year old. MNI recommended that NMBI request a new CCPS for those nurses when issuing their DL and when they are in their country of origin or employment. NMBI acknowledged the issue and stated that they would consider MNI’s suggestion.

MNI also raised the issue pertaining to the new rule of asking for a valid IELTS/OET at the last stage of application which has resulted in a lot of practical difficulties for nurses. A migrant nurse won’t start his/her application without knowing whether she/he will pass the test or not. Hence, a majority of nurses start their application after passing IELTS/OET which results in a situation where a lot of nurses’ IELTS/OET expires towards the end stage of their application. Mr Healy promised to convey NMBI’s stand to IELTS/OET authorities that the validity of these exam certificates should be more than 2 years

As a follow up this, MNI will meet with Ms Sheila McClelland, CEO of NMBI on the 6th July 2022 to discuss these issues further.